A recent article When to Fire a Top Performer on the HBR Blog Network by Eric Sinoway caught my eye. In the article Eric classifies employees into four categories based on their performance and their alignment with the organisation's values and culture.

Sinoway's four categories include:
The 'Vampires' as Sinoway calls them can cause untold damage to your organisation, despite the appearance that they 'get results'.

Reading the article reminded me of a framework I had learned from Jack Welch while he was CEO of GE. 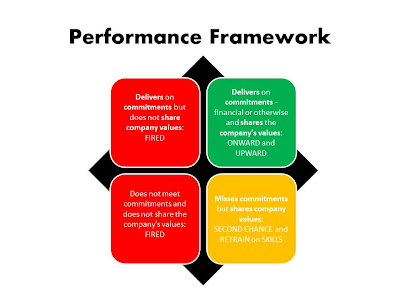 Welch's view was that these people damaged both internal and external relationships and as such would damage the company in the long term, which is why he fired them.

The beauty of these models and approaches is that they provide us with a framework for conversations and decision making.

How does your organisation manage the dilemma of a high performer who doesn't align with the company's values?