If you are leading a business and want to know how to provide great service, then read on and learn how a team of volunteers from the Montrose Football Club who play in Division 1 of the Eastern Football league provided an experience that the USA Revolution will never forget. This story will teach you about the power of creating a shared vision, the preparedness to tap into the special skills that people bring to their work and the willingness to work with competitors to create a service that produced mutual benefits for all involved. What business wouldn’t like to learn these lessons! The AFL International Cup (AFLIC14) has recently concluded with Papua New Guinea defeating Ireland in an exciting and dramatic game at the Melbourne Cricket Ground.

18 countries competed over 13 days in both mens and women’s competitions. Every player had to be a citizen of their country so no ex-pat Australians were included in their teams. This was truly an international competition.

In a stroke of genius the third round of the competition saw local teams throughout Melbourne host teams involved in the AFL International Cup, culminating in the Community Round where AFLIC14 games were held as the curtain raiser to the ‘main local game’.

My twin brother Denis Ryan is both the President of USAFL and the mid-field coach for the USA Revolution (the men’s team).

Montrose Football Club, who compete in the Eastern Football League were assigned as hosts for the USA Revolution. The “Revos” (as they call themselves) travelled to Montrose to train with them on Thursday 14th August before their game versus the New Zealand Hawks on Saturday 16th August.

The USA Revolution squad, coaches and support staff were ‘blown away’ by the hospitality shown by Montrose Chairman Rob Ewart, Senior President Tony Eastwood and their dedicated Sub-Committee that was led by Rod Buncle and Terry Dean as well as their band of merry helpers. While the USA Revolution were hoping for a ‘good’ experience from the Community Round, what they received was better than any of them could have imagined.

Lesson #1 Identify mutual benefits
Like most success stories the real work started many months ago when the EFL sent out an expression of interest to all its clubs about applying to become a ‘host’ for one of the games. Senior Club President Tony Eastwood saw the opportunity as one that would enable Montrose to take significant steps toward bringing its vision of being, “Seen as a quality EFL Division 1 club” into reality. He immediately contacted his Blackburn Football Club counterpart and discussed the possibility of putting in a joint expression of interest with Montrose to host the USA Revolution and Blackburn to host the New Zealand Hawks.

While fierce competitors on the field, the Montrose and Blackburn Football Clubs understand that they both have a responsibility to grow the game and to set high behavioural standards for their members, players and communities. The clubs play off for the One Punch Cup which is a game where they raise awareness about the dangers and injuries that arise from nightclub fights. (Kyle Matthews was playing for the Casey Scorpions as an up and coming VFL star. He was punched in a fight at a nightclub, fell and hit his head causing serious head injuries. Kyle has an association with the Blackburn Football Club and his best friend plays at Montrose).

Leveraging the success of working together on the One Punch Cup the two clubs’ application to the EFL was accepted and the third round game of the AFLIC14 was scheduled to be played at Montrose.

Lesson #2 Give talented people the autonomy to use their talent 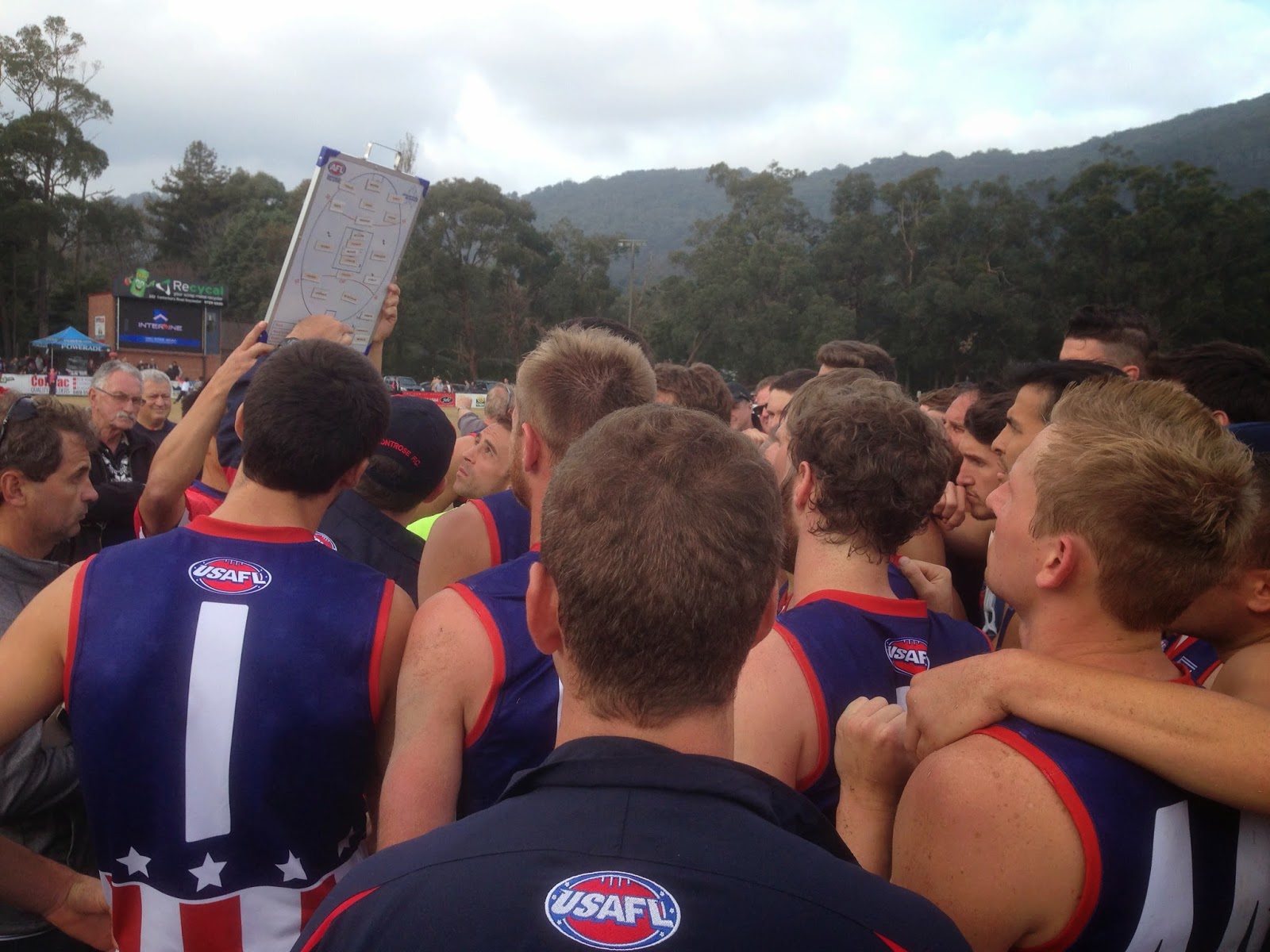 Terry Dean and Rod Buncle quickly formed a sub-committee to make sure that the day was a success. They worked with their team including Jenny McArdle, Kerry Schilling and members from the Montrose Coterie Group to make sure that the day was a special event for everyone. Using his corporate skills, Rod created a very detailed schedule of events that also included a link to the AFL’s vision for the community round. This ensured that everyone involved in hosting the event, which was upwards of 35 people, knew exactly what they had to do and when to do it. This is an example of letting good people use their talents and skills in the service of a vision that truly is shared.

Lesson #3 Identify, develop and share your vision of success
The Montrose and Blackburn Football clubs wanted to make sure that members from both teams had an experience that showed them what playing community football in Australia was really like. As a result of their research they became aware that the Revolution players rarely played at anything other than make-shift fields, and most often got changed out of the back of cars or in tents.

In light of this understanding, Rod, Terry and their team went to extraordinary lengths to create the experience that the international players would never have imagined. They approached the EFL and requested that the football Record for the EFL 17th round be designed to feature the USA Revolution and New Zealand Hawks teams. The EFL accepted the request and ensured that both the cover of the record and the middle pages were dedicated to the AFLIC14 game. This is an example of ‘managing up’. Through Rod and Terry’s influence the EFL was able to see how they too would benefit from helping to showcase the AFLIC14 game (they also provided 250 extra copies of the record at no charge!).

The Revolution squad members, coaches and support staff were all provided with a ‘showbag’ that included a membership to the Montrose Football Club, a miniature Montrose Football and a Montrose club cap. In addition, each locker in the changeroom was adorned with information about one of the USA players including their jumper number, name and other details. This information also adorned the walls of the social rooms. Rod and Terry explained that they had done this so that not only would the Revolution players feel at home (and have a real experience of having their name on a club locker), but it would also make it easier for the Montrose players, committee and supporters to engage with them and use their names.

It is this level of thinking that drives high performance. To bother to find a way to help their own community to engage with the Revolution players on a personal level is exactly what high performing organisations do.

Daniel Pink in his book Drive describes ‘Purpose’ as one of the three key elements for creating engaged and self motivated employees. This story highlights the power of a purpose that really matters to people. People want to be part of something bigger than themselves. Why else would all the volunteers from the Montrose and Blackburn football clubs go to such lengths to create the experience that they provided for the Revolution and Hawks players? The question for you is, “How do you create a sense of purpose for your employees? One that will genuinely engage them and enable them to use all of their talents in the service of that purpose.”

Lesson #4 Connect with all your stakeholders A lasting memory for me is the image of the USA Revolution players leaving the field at the end of their game clapping the Montrose community as a sign of their appreciation for their support. In unison the Montrose community clapped them back. It was a pure moment that was about Australian Rules Football and the (now) international role that local clubs are playing in helping to take the game beyond Australian shores.

More than 1,500 people attended the game including many local residents who hadn’t been to a game (This game would normally attract about 600 people). As an introduction to the club they could not have had a better experience. The term “win/win” is thrown around a lot these days but on this occasion the Montrose and Blackburn football clubs did themselves proud and could not have been better hosts for our international guests.

This entire story was driven by volunteers, all of whom have busy lives. The success they created was because of the power of sharing a vision that was bigger than any person, allowing talented people to work together for the common good, and through understanding the expectations of the community they were serving and doing everything possible within their limited resources to exceed those expectations.

No doubt a lot of hard work went in to hosting the event. No success comes without hard work. No doubt you work hard too. But you might not be getting the success you desire. If not, re-read this article and pick out the many lessons that will help you and your team achieve the type of excellence that the Montrose and Blackburn football clubs provided the USA Revolution and New Zealand Hawks Respectively.

As an anecdote to this story several Revolution players have already commenced talks with Montrose to come out and play with them in 2015. Montrose views this as an opportunity to strengthen their ties with USAFL and are eager to build on their AFLIC14 experience.

Gary Ryan enables organisations, leaders and talented professionals to move Beyond Being Good.
Posted by Unknown at 2:24 PM